Starting with my second pair of shoes, I thought I was better prepared  for the hours ahead.

After the first day of photographing flood waters rise and victims being rescued from boats, I thought I had seen the worst of the damage to our town, but not so.

I had planned to edit the enormous amount of photos I had taken on Wednesday, in hopes of posting some to add to our website.

We soon learned that we would be loosing power due to the flooding of the Mill Street substation , which supplies power to most of the town.

I decided to walk down, it’s right around the corner  from our office, to survey the damage. When I arrived, I was taken over by the amount of water covering the streets. I couldn’t get past the water department, due to the water, so I headed to get a view from the other side. As I walked around the corner, I saw a crowd of people standing there, in awe of the scene.

I had wanted to make sure people were informed as I walked down the streets, so when I saw the group of people, the first thing I did was tell them the most current information I knew. Some of them already knew, some didn’t. But I felt that I should  tell as many people as possible that 9-1-1 wasn’t working in the borough, that people were being told to evacuate, and other details that had been developing in the last hour.

My editor was unable to travel from Lebanon, where he lives, to  Middletown, due to road closures.  Most of the day I walked around,  drove where I could, and talked to him about what was going on, so that he could update our website.

I sent him this photo, of the Mill Street Substation, to update our website.

Once I got back to the office, I had planned to start editing, knowing that it was just a matter of time until we lost power.

Moments before I walked in the door, we lost power. I had no way to edit, to write, or do anything. So I went back out and started to photograph the hardest hit areas of Middletown and then  hoped to get to Highspire. 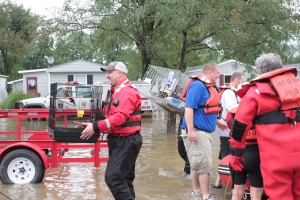 I spent some time talking with some river/boat rescue workers, who were kind enough to let me stand in the truck  bed to take photos while they brought people and animals from their homes in Harborton Place.

After spending time there, I headed back for lunch at my apartment, and to change, I was soaked, and moved to my third pair of shoes.

I shortly after, heard that power was back on, and so I alone, headed back to the office, for hours of editing. I finished at a bit after 9 p.m. Glad to be caught up with all of the photos, I headed home.